Introduction
The conflict between Iran and Sunni countries – especially Saudi and Arabia Egypt – has escalated the tension between Sunnis and Shi’ites in the Muslim world. This escalation has had several manifestations:

Sheikh Yousef Al-Qaradhawi, head of the International Union for Muslim Scholars, made harsh anti-Shi’ite and anti-Iran statements in the Egyptian and Saudi press. He warned against the danger posed by the spread of the Shi’a in Sunni countries, characterizing it as part of Iran’s campaign for regional hegemony. He added that there was no possibility of rapprochement between Sunnis and Shi’ites, since there were fundamental principles of the Shi’ite faith that the Sunna could not accept. Despite strong criticism of his statements by Iranians and Shi’ites in the Gulf, Qaradhawi only reiterated them, refusing to either retract them or apologize.

The sectarian tension is also mirrored on the Internet. Hundreds of websites associated with either the Sunna or the Shi’a – including sites of clerics, papers and government ministries – have been hacked, and defaced with offensive messages and images. Among the prominent Sunni websites that have been attacked are the Saudi Al-Arabiya website, the website of former Saudi mufti ‘Abd Al-‘Aziz bin Baz, the website of the Kuwaiti Ministry of Religious Endowments, and a website of the Saudi Higher Education Ministry. The Shi’ite websites that have been targeted include those of the supreme Shi’ite religious authority in Iraq, Ayatollah ‘Ali Hussein Al-Sistani, a website of the Shi’ite community in Egypt, and many others.

The Arab press reports that the Saudi authorities have been discriminating against Shi’ites in the country, e.g., by preventing Shi’ite representatives from participating in the June 2008 Interfaith Dialogue Conference in Mecca, closing Shi’ite mosques, arresting senior Shi’ite clerics, and persecuting Shi’ite pilgrims from Iran. In addition, Saudi Sunni clerics have made anti-Shi’ite statements, accusing the Shi’ites of heresy and of trying to take over the Muslim world. Some clerics have even condemned initiatives for Sunni-Shi’ite rapprochement aimed at easing the tension between the two sects.

The following report deals with the Sunni-Shi’ite cyberwar. Reports about the other two manifestations of Sunni-Shi’ite tension will be published in the next few days.

The Sunni-Shi’ite cyberwar started in 2007 when a group of Sunni hackers calling itself “XP Group” threatened to attack all Shi’ite websites on the Internet, and proceeded to hack some 120 Shi’ite sites. At this point, representatives of the targeted sites, headed by Shi’ite sheikh Hassan Al-Saffar, filed a lawsuit in Saudi Arabia against a member of the XP Group named Na’if Al-Ghamdi. According to recent reports on Sunni forums, Al-Ghamdi has been arrested, and has disclosed the names of 17 other hackers operating in Arab countries. [1]

However, XP Group is not the only player in the arena. In May 2008, a group of Iranian hackers called “Ashiyane Digital Security Team” attacked the website of the UAE daily Al-Khaleej. Users who accessed the homepage found the image below: 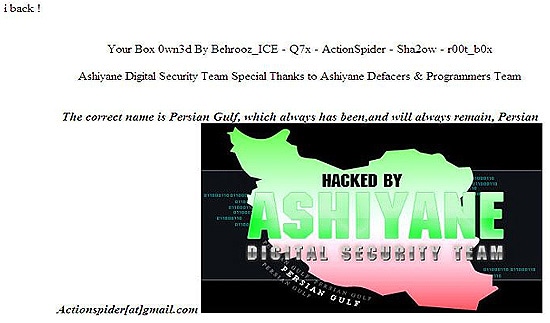 The image is a map of Iran, with the Gulf labeled “Persian Gulf,” rather than “Arabian Gulf” as it is called in the Arab world. Above the map is a message in English, saying: “The correct name is ‘the Persian Gulf,’ which always has been, and will always remain, Persian.”

Another message planted on the site proclaimed that the attack had been carried out by Mazhar Fashist, a member of Mafia Hacking Team Iran. [2]

Sunni Hackers: Electronic Jihad Against the Shi’a Brings One Closer to Allah

In response to this incident, a number of Sunni hacker groups pledged to retaliate against Shi’ite sites. Among them were two groups called Shabab Al-Salafiyin and Al-Ayyoubiyoun. The latter declared on various forums that the war against Shi’ite sites was a form of jihad that brought one closer to Allah. The threats were realized in August 2008, when a group of Egyptian and Saudi hackers attacked the Shi’ite sites Fatimid Egypt, Egyptian Shi’a, and others. This prompted a Shi’ite group, Shabab Al-Shi’a, to threaten further attacks against Sunni sites. [3]

Shi’ite Cleric: The Hackers Will Not Silence the Shi’ite Voice

The cyberwar between the Sunnis and the Shi’ites intensified following statements by prominent Sunni sheikh Yousef Al-Qaradhawi in September 2008 against the spread of the Shi’a in Arab countries and against the Iranian regime, whom he accused of being behind this phenomenon. [4] The Sunni XP Group now hacked some 300 Shi’ite sites, including those of Ayatollah ‘Ali Al-Sistani, the leading Shi’ite cleric in Iraq; prominent Saudi sheikh Hassan Al-Saffar; Ayatollah Muhammad ‘Ali Taskhiri, secretary-general of the World Assembly for Proximity of Islamic Schools of Thought; and Ayatollah Sheikh Nasser Makarem Shirazi, one of the ayatollahs of Qom, Iran. The targeted sites were defaced with messages in Arabic maligning the Shi’ite faith and Shi’ite leaders. On Al-Sistani’s site, the hackers also planted a satirical video deriding the sheikh. 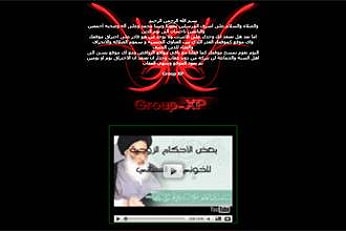 Ayatollah Shirazi condemned the attack on his site, saying that the perpetrators were extremists who wanted to keep the voice of the Shi’ite leaders from being heard around the world. The attacks, he added, only proved that the Shi’a was the right faith, and would cause more young Sunni Muslims to turn towards it. [6]

The Shi’ite hacker group Ashiyane Digital Security Team now launched a counter-attack on 77 Wahhabi websites, including those of prominent Sunni clerics such as former Saudi mufti Sheikh ‘Abd Al-‘Aziz bin Baz. They also hacked sites inciting against the Shi’a. The targeted sites were filled with colorful images of important figures in the Shi’ite faith, such as Hussein and ‘Ali, along with a message saying “this is only the beginning [of the Shi’ite attack],” and the Koranic verse “One who attacketh you, attack him in like manner as he attacked you… [Koran 2:194].” At the same time, members of Shi’ite forums called to form “bases” where experienced Shi’ite hackers would offer instruction in how to destroy Sunni sites. [7]

Shi’ite hackers also attacked the website of the Kuwaiti Ministry of Religious Endowments, replacing its homepage with the image below. [8] 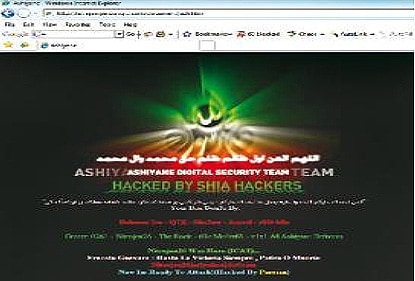 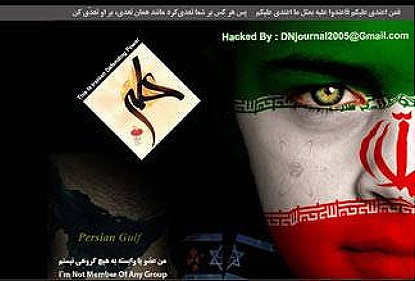 The face has an Iranian flag superimposed on it. In the background is a torn Israeli flag and a map labeled “the Persian Gulf.” Sheikh ‘Aidh Al-Qarni stated in response to the attack that hacking websites was an aggressive and depraved act, at odds with Tehran’s calls for cooperation and coexistence between Shi’ites and Sunnis. [9]

Shi’ite hackers also managed to bring down the site of the popular Saudi TV channel Al-Arabiya (http://www.alarabiya.net/ ), planting the following image in its front page: 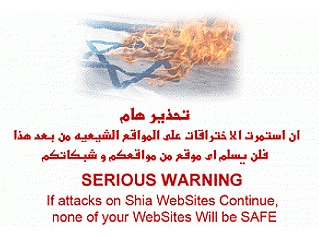 The image shows a burning Israeli flag, accompanied by a message in Arabic and English saying, “Serious warning: If attacks on Shi’ite websites continue, none of your websites will be safe.” [10]

Also targeted was a site of the Saudi Higher Education Ministry dedicated to the teaching of Arabic. The website, founded by the minister and sponsored by the Saudi king, is a resource for students, teachers and researchers, with over 4,000 texts and a search engine. Its manager, Dr. Salah bin ‘Abd Al-‘Aziz Al-Nassar, stressed that the site had nothing to do with sectarian strife. [11]

Egyptian Columnist: Hacking Websites Is No Less a Crime than Murder or Arson

Egyptian columnist Diana Muqallid wrote about the cyberwar in the London daily Al-Sharq Al-Awsat: “It seems that the groups inciting sectarian [hatred] in our countries do not only blow up mosques and Shi’ite places of worship, and send out suicide [bombers as part of their] extremist war. The reciprocal killing in Iraq, the clashes in Lebanon, and the suspicion prevailing in many of the countries where Sunnis and Shi’ites live [side by side] are not enough for them – they must also [find other ways to] express their extremist sentiments, which are fueled by radical political views… Battles between Sunni and Shi’ite sites are being waged [on the Internet], with each side virtually killing and harming the other by targeting the websites of religious figures, political leaders, and media outlets such as http://www.alarabiya.net/…

“Some still believe that hacking [sites] on the Internet is not a real or a serious [crime], but things are not so simple… Destroying a website or hacking it in order to keep people from entering it is [no less a crime than] murder, siege and arson. It is an act of negating the other. In our lifetimes, [we have seen] journalists murdered, incarcerated, tortured and exiled. Media outlets have been closed in our region or placed under supervision, [and their premises] have been burned down. Electronic attacks convey the very same sentiment of wanting to negate the other…” [12]

*L. Azouri is a research fellow at MEMRI.

[4] See MEMRI Special Dispatch No. 2080, “Sheikh Yousef Al-Qaradhawi in Interview With Egyptian Daily: Mubarak Should Step Down and Should Not Pass Presidency to Gamal; The Spread of the Shi’a Is A Danger,” October 16, 2008, http://memri.org/bin/articles.cgi?Page=archives&Area=sd&ID=SP208008.

[10] http://www.alarabiya.net/, October 10, 2008. Prior to the attack, the site was criticized by Shi’ites in Lebanon, Iran, Iraq and Syria, who accused it of anti-Shi’ite and anti-Iranian bias. A prominent Iranian Majlis member said that Al-Arabiya was an agent of the CIA, since it aired anti-Iranian content. Al-Arabiya, for its part, reports that Iran has expelled its correspondent from Tehran and declared him persona non grata (Al-Quds Al-Arabi, London, October 12, 2008). In response to the hacking of its site, Al-Arabiya stated that it would continue its tradition of moderate, balanced, and objective reporting and of upholding professional ethics (Al-Riyadh, Saudi Arabia, October 11, 2008).