The Cabinet of Japanese Prime Minister Shinzo Abe has just approved a bill that aims to make significant changes to the nation’s immigration control law to reflect the changes in the workforce and society. Abe was crystal clear when he said that Japan has a need for temporary workers, but it has no need for “so-called immigrants.” Japan as a graying nation with a shrinking workforce needs both robots and outside help especially in the areas of construction, transportation, retail and life sciences. Thus there will be the creation of a new residence class for foreign workers, but critically different from the West, they will only ever have visitor status – they will not be allowed to stay en mass.

(Having lived in Japan both as a student and a temporary worker, I can confirm that my student and work visas were only good for 6 months at a time and had to be renewed in order to stay for one year. Should you not leave Japan by the date your visa expires, immigration officials will hunt you down and deport you when they find you…and find you they will. —BNI) 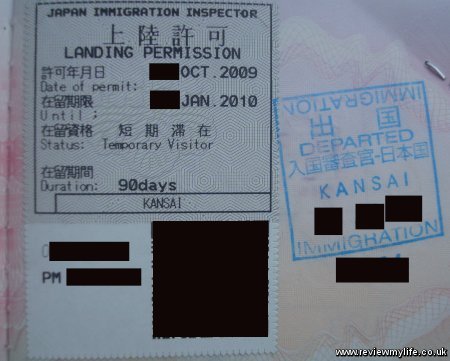 Abe made it clear, “We are not adopting a policy on people who will settle permanently in the country, or so-called immigrants.” Japan does not practice uncontrolled mass migration and benefits to their society continue to stack up. And as a result, Japanese workers are enjoying a 5-year period of growth in jobs, and most importantly better working conditions.

Even better, because Japan takes in few if any, Muslim migrant workers, it has yet to suffer Islamic terrorist attacks as Western Europe and the United States have.

Anti-immigration protesters in Japan are well-protected by police.

AM I RACIST? Japan anti-immigration protesters rally guarded by police
Watch this video on YouTube.

Japan is one of the developed world’s least welcoming countries for asylum seekers. It accepted only 28 in 2016, despite applications from a record 10,091 people. Since 2008, only 152 people have been granted asylum in Japan, which rejects about 99% of asylum requests every year. 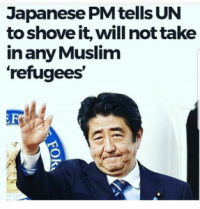 Reuters: Multiculturalism is seen as destructive to Japanese society, traditions, and culture. Japanese pride themselves on the homogeneous nature of the country and their immigration policies reflect that. 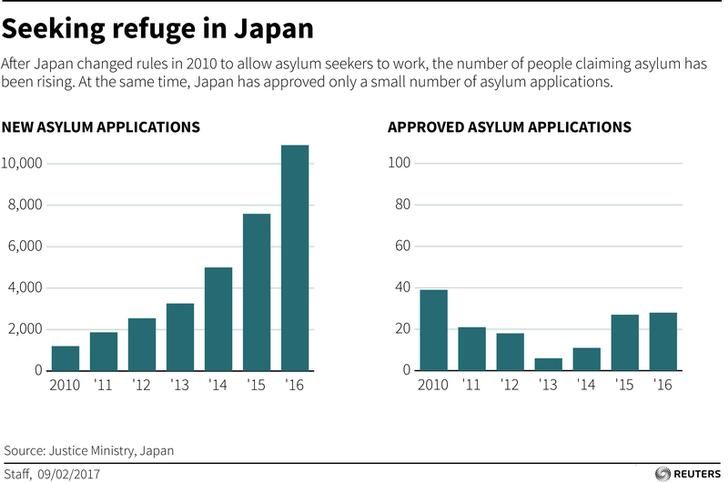 Japan’s reluctance to accept refugees mirrors a wider caution towards immigration in a nation where many pride themselves on cultural and ethnic homogeneity.

(Many long-time Korean residents in Japan, change their names to Japanese ones because of discrimination)

According to Human Rights Watch, when looking for solutions to the global refugee crisis, Japan is often identified as a country that could do more. It contributes generously to the United Nations refugee agency but does very little in terms of accepting asylum seekers in Japan, especially MUSLIM asylum seekers. 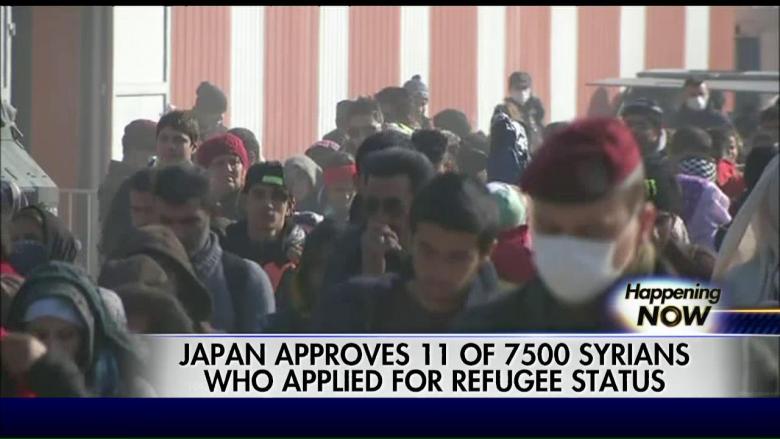 The Tokyo Reporter reported that of the handful of Muslim refugees Japan did accept last year, two of them, aged 22 and 16, have already gang-raped, assaulted, and robbed a 31-year-old Japanese female.

Out of 7,586 asylum applications received in 2015, Japan accepted just 27. The figure was announced by the country’s Ministry of Justice. The minister pointed out that “the figure is a significant increase compared to the 11 refugees in 2014 and six in 2013.” According to the latest UNHCR figures, of the more than 128 million residents in the land of the rising sun, there are just 2,419 refugees.

Japan Rejected Over 99% Of Refugees Last Year. Here’s Why.
Watch this video on YouTube. Muslim Immigration and How to Handle It